Deep in the bowels of Essex University, sitting far below the student hubbub of shops, bars and hangovers, some of the most intelligent researchers in the country are plotting.

Plotting new ways to improve the lives of thousands of disabled people. Plotting innovative technologies which have never been seen before. Plotting their assault on the 2016 Cybathlon championship.

The aptly named Brainstormers, a team of scientists at the School of Computer Science and Electronic Engineering, will be competing in next year’s event as an aside from their revolutionary studies into brain computer interfaces (BCIs).

Hidden away down a few damp flights of stairs and a long, thin corridor filled with identical doors and not much noise, it would be easy to forget that the Brainstormers are living on the front lines of one of the most exciting pieces of technology in the UK.

Feeling wired: Youngjae Song gets ready to test the BCI

BCIs are still developing, but they essentially allow the Brainstormers (and others across the world such as scientists at the Center for Integrative Neuroscience at Berkeley and the Life Science Center in Tokyo) to capture brain signals and turn them into commands.

In other words, they let you communicate without speaking or moving – meaning humans will be able to operate computers, robots or virtual reality environments using just neurosignals, even if they have no control of their muscles. 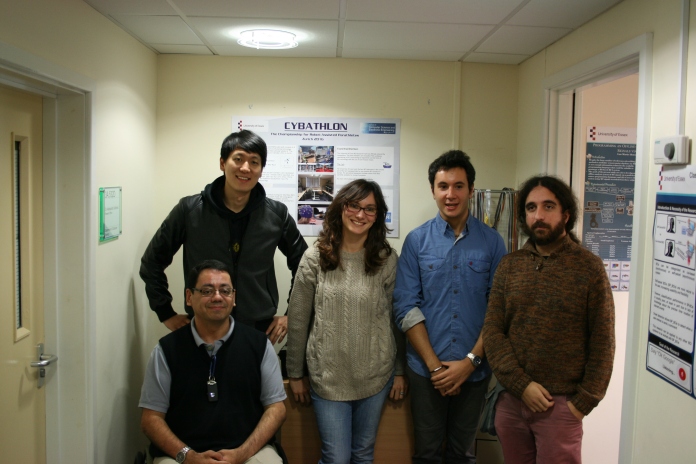 Matran-Fernandez says the technology – if developed properly – can have a massive impact on those that need help communicating and says Cybathlon will be the perfect place to showcase the potential of these interfaces.

“We think Cybathlon is going to be really good for BCIs,” she said.”So when we read about Cybathlon we thought it would be a great way to get known by external people and try to help.

“It’s going to expose the field so more people will know about it and that’s great because they have the potential to do a lot of good.”

BCIs won’t just be shaping the field for disabled people, though. As Sepulveda points out, they could also have a huge impact on the gaming industry as companies and competitors look for new, imaginative ways to test themselves.

Nature of the beast: The disparity between ideal brainwaves and typical signals shows how difficult the task is

With the support of BioSemi, one of the nation’s leading electro-physiologic equipment suppliers, the team are currently on the hunt for a pilot to compete as part of the Brainstormers team.

“Between now and Cybathlon, we will first be looking for more sponsors and we’ll also be looking for a pilot, which is the main difficulty at this point,” Matran-Fernandez says.

“Other than that, we’re going to be training hard for the mock test and hopefully we will have someone to help do that. Once we do, we’ll know how things are and we’ll be able to be more specific with our preparation.”

But how does it work? We were shown into a small windowless room in a corner where the machine was kept as Youngjae Song put the equipment on – a lovely piece of gear which looked like a washed-out red swimming cap, except it was crawling with worm-like wires, which pick up the neurosignals.

“When you’re using the interface, you display something on the screen and you can time the brain signals based on what is being played and interpret them one way or the other,” Matran-Fernandez explains.

Although their game involves either a car or a horse, which pilots have to turn round obstacles and past corners, that may change in the competition itself.

“We don’t really know what Cybathlon is going to be like but what we’re expecting is some sort of track and racing video game which the pilot sees on his screen.  What we think is going to happen is that the person has to drive the car to the left or the right,” she says as we watch the game in motion.

“We will ask them to think and move the car, so they think of moving their left hand or foot, or right hand or foot and the car will move in that direction. That’s one of the several types of games there are.”

Head in the game: Youngjae Song locks into the BCI

Of course, it’s not completely flawless technology at the moment, as Dr. Asensio-Cubero points out.

“It’s not really accurate or reliable – you may get 60 per cent accuracy or maybe 80 per cent if the subject is really good,” he says. “This event requires a really high standard of pilot.”

Another way of working with BCIs is to examine “P300” signals – brainwaves which appear soon after the presentation of a stimulus of interest, according to Matran-Fernandez.

“So if you’re shown what we call ‘distractors’, and you see the thing you’re looking for which is of interest, your brain produces these signals and the computer will know what you’re interested in.

“Based on that, there are games called ‘Spellers’. With these, there are lots of rows of letters or numbers, and when a row or column which contains the letter you want flashes we can see it on the screen.”

Sound simple? Maybe. Does it look simple? Not at all. These rows and numbers flashed at such speed that it was exhausting just looking at it, let alone trying to spell a word by focusing on individual symbols.

But with a skilled and experienced pilot, it’s clear to see how this technology could change the lives of people who are ‘locked-in’ and cannot communicate in other way.

“It’s for people who cannot even move their eyes,” says Asensio-Cubero. Nothing hits home how important their work is better than that sentence.

BCIs are perhaps the most iconic event in Cybathlon – nothing else pushes the boundaries of technology quite so far. Although crouching in the basements of Colchester with barely any natural light certainly adds to the experience, it’s clear to see that this is a remarkable concept using remarkable technology. And, frankly, as we watched Song twist and turn a virtual car on a virtual track using just his thoughts, it’s fair to say that it’s remarkably cool.

If you think you would be a suitable pilot for the Brainstormers, get in touch with them here: http://essexbcis.uk/contact-us/

And listen to the extended chat with the team: